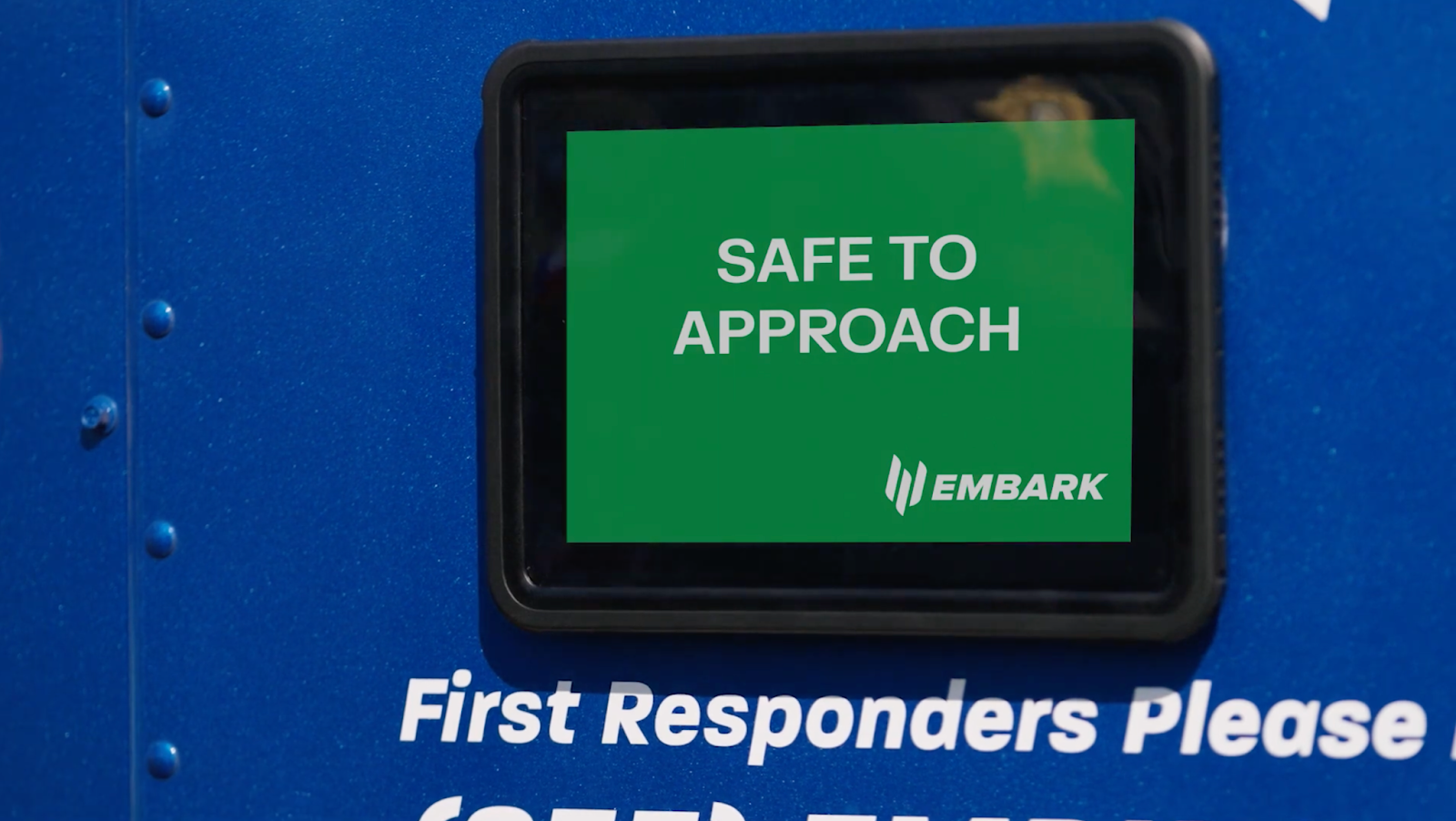 Example of status screen indicating autonomous truck is safe to approach after stopping on the highway shoulder. 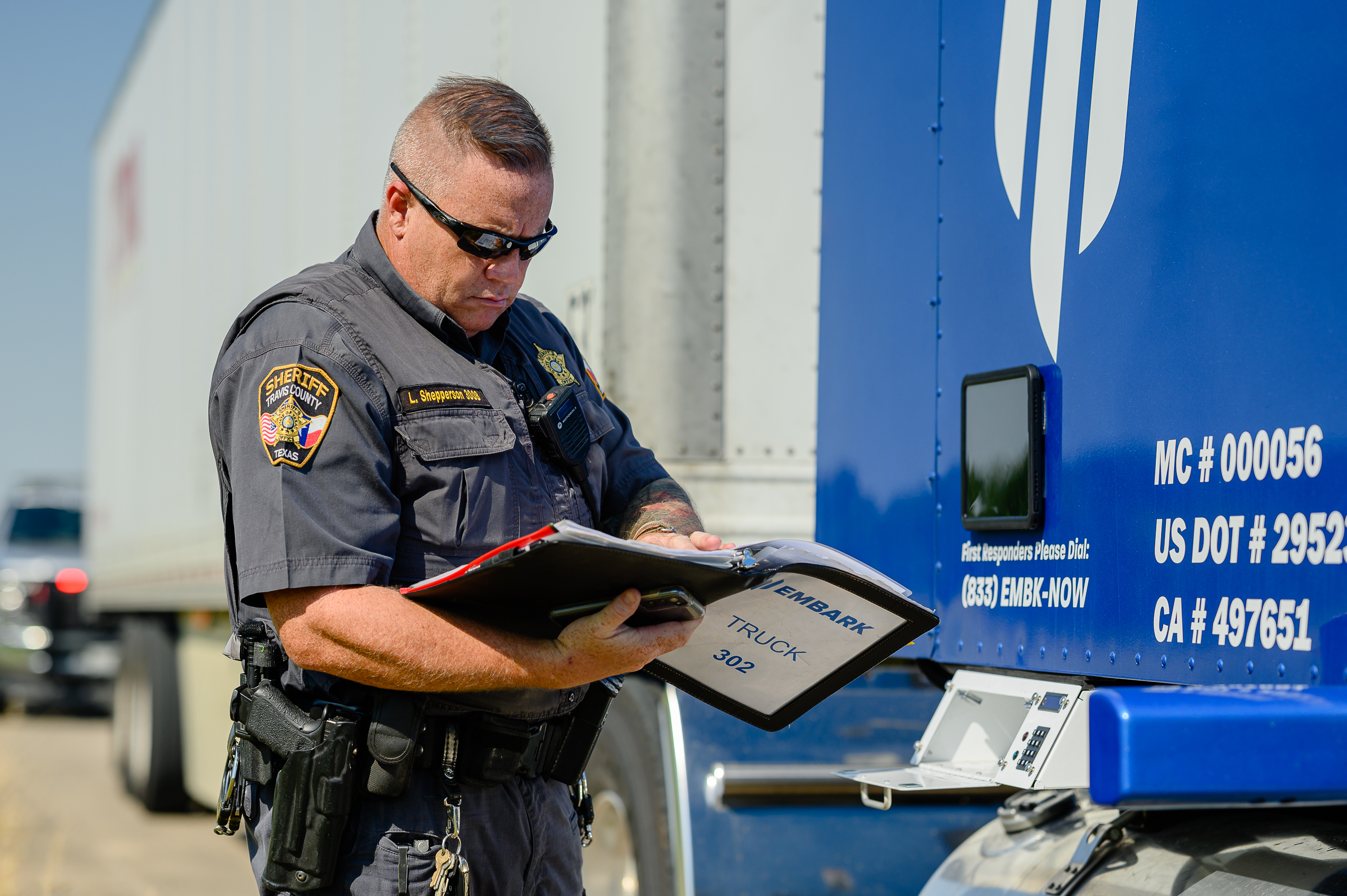 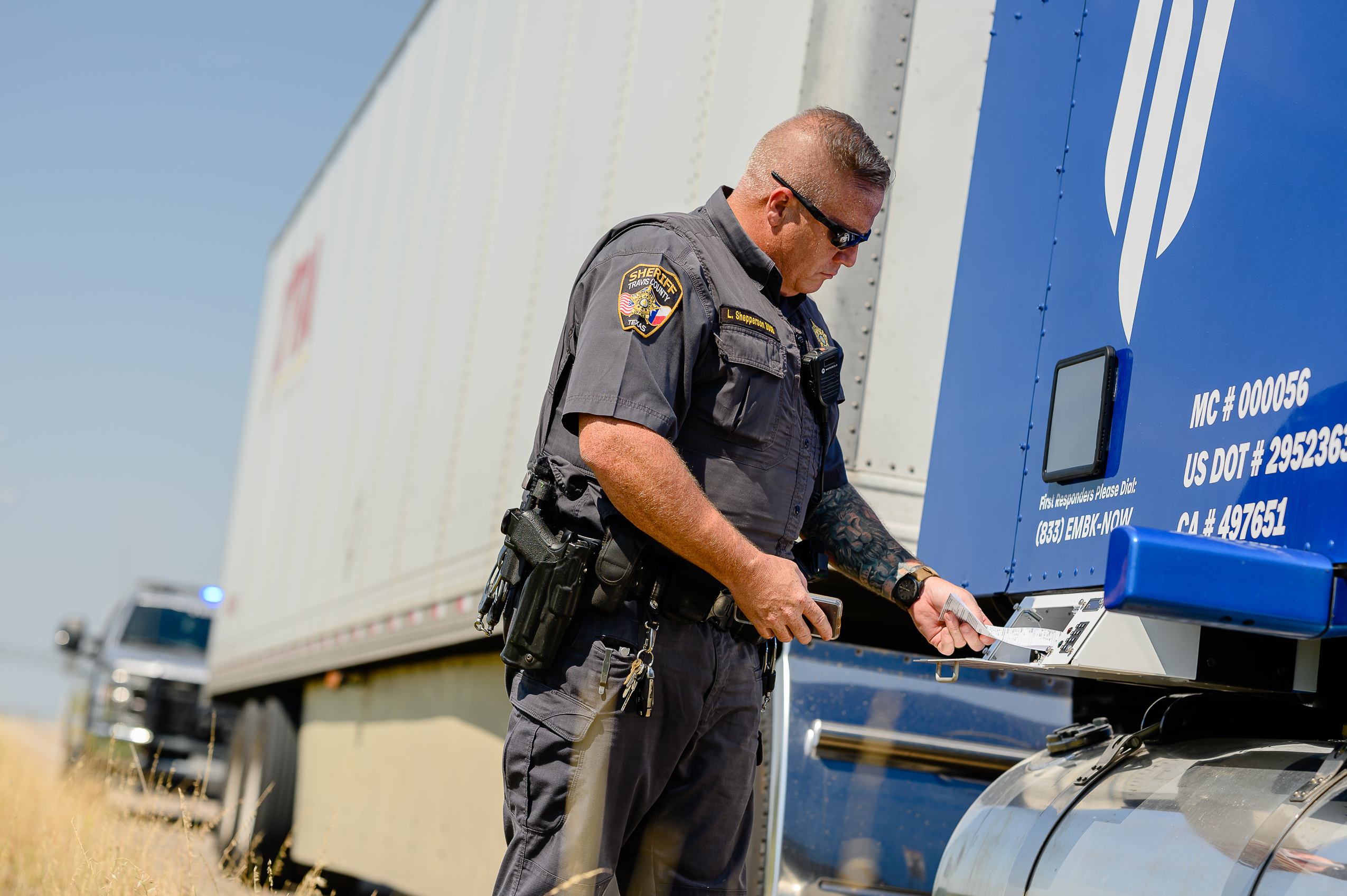 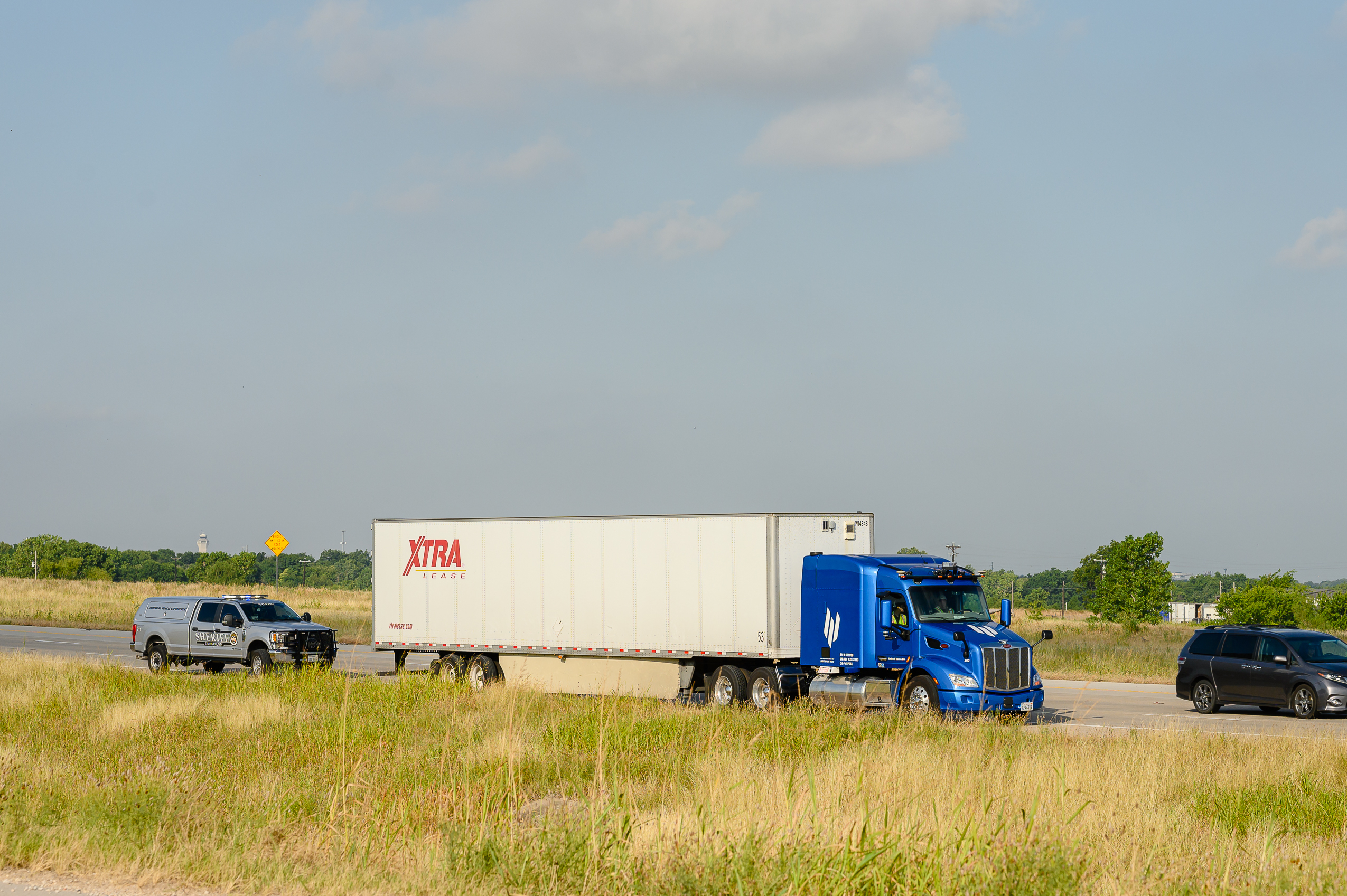 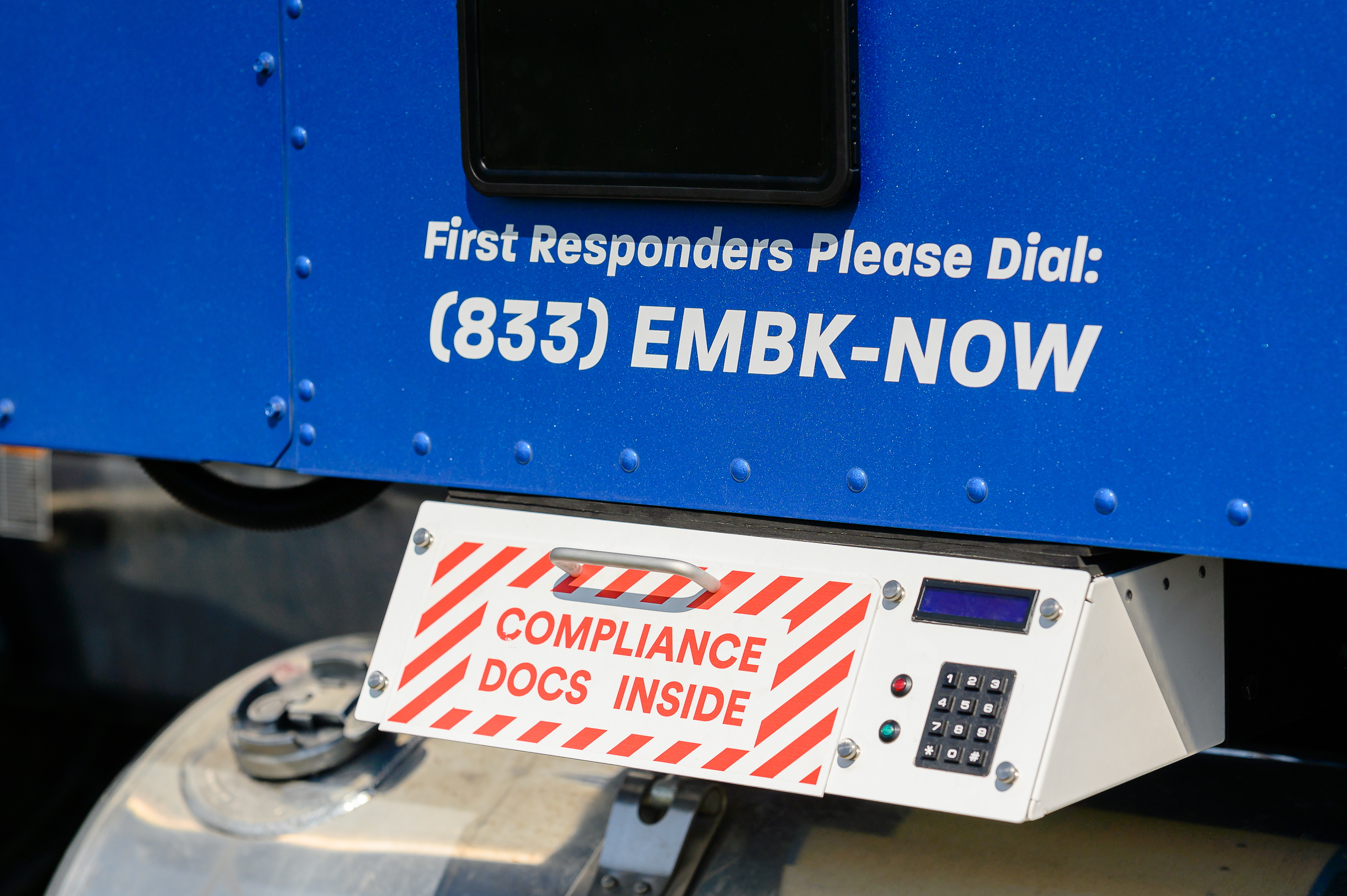 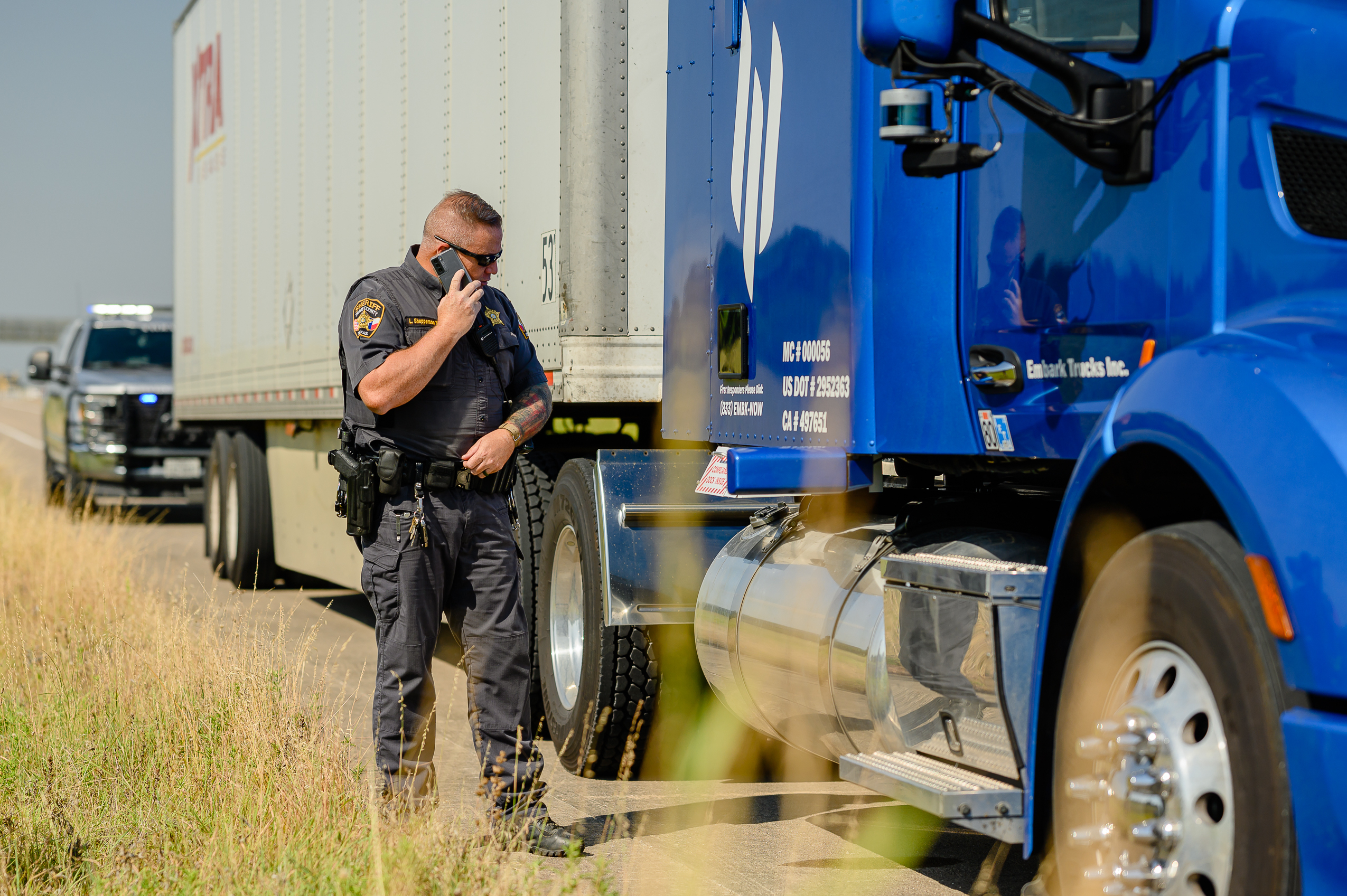 Example of a law enforcement officer approaching an Embark-powered truck. 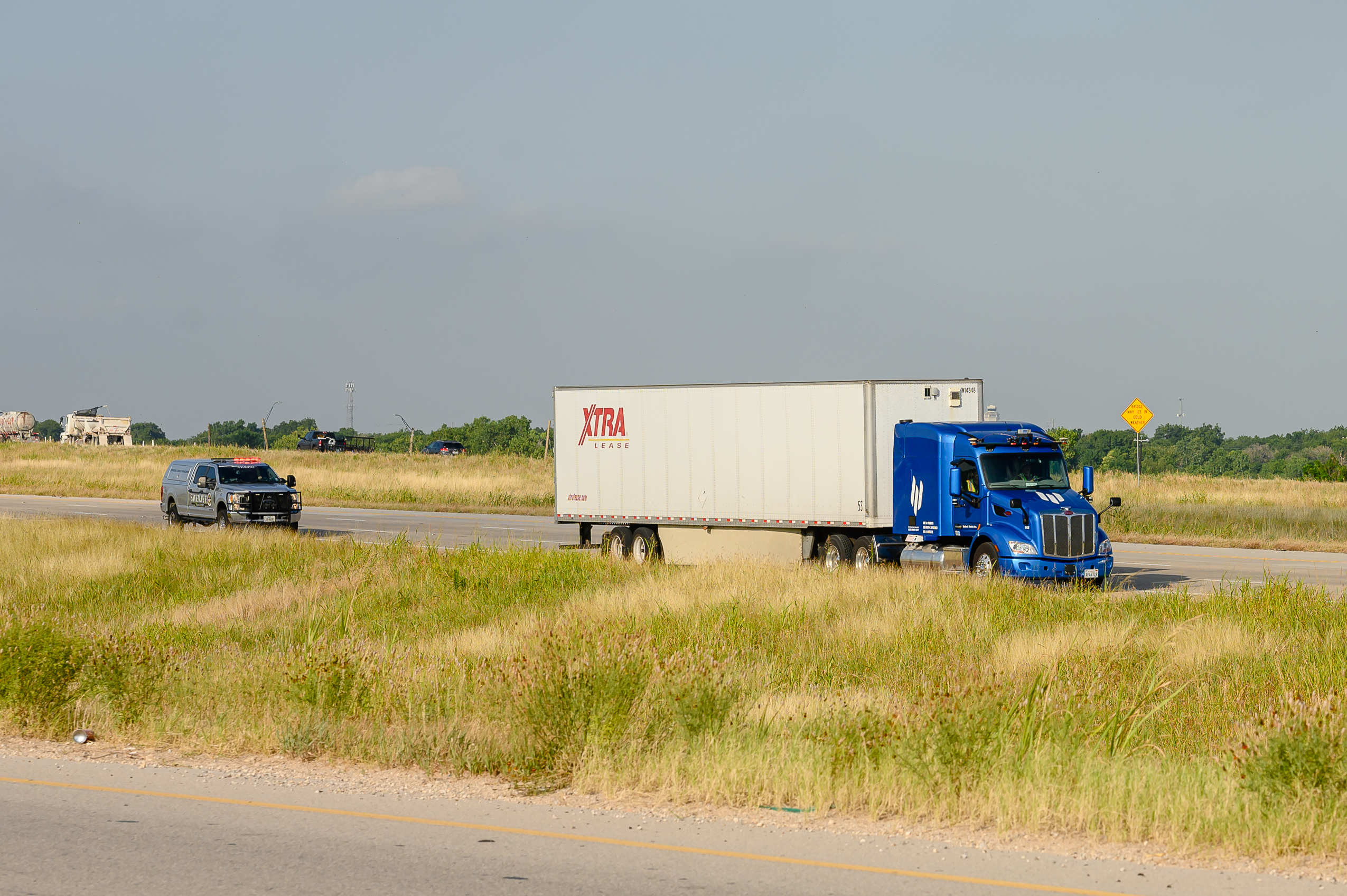 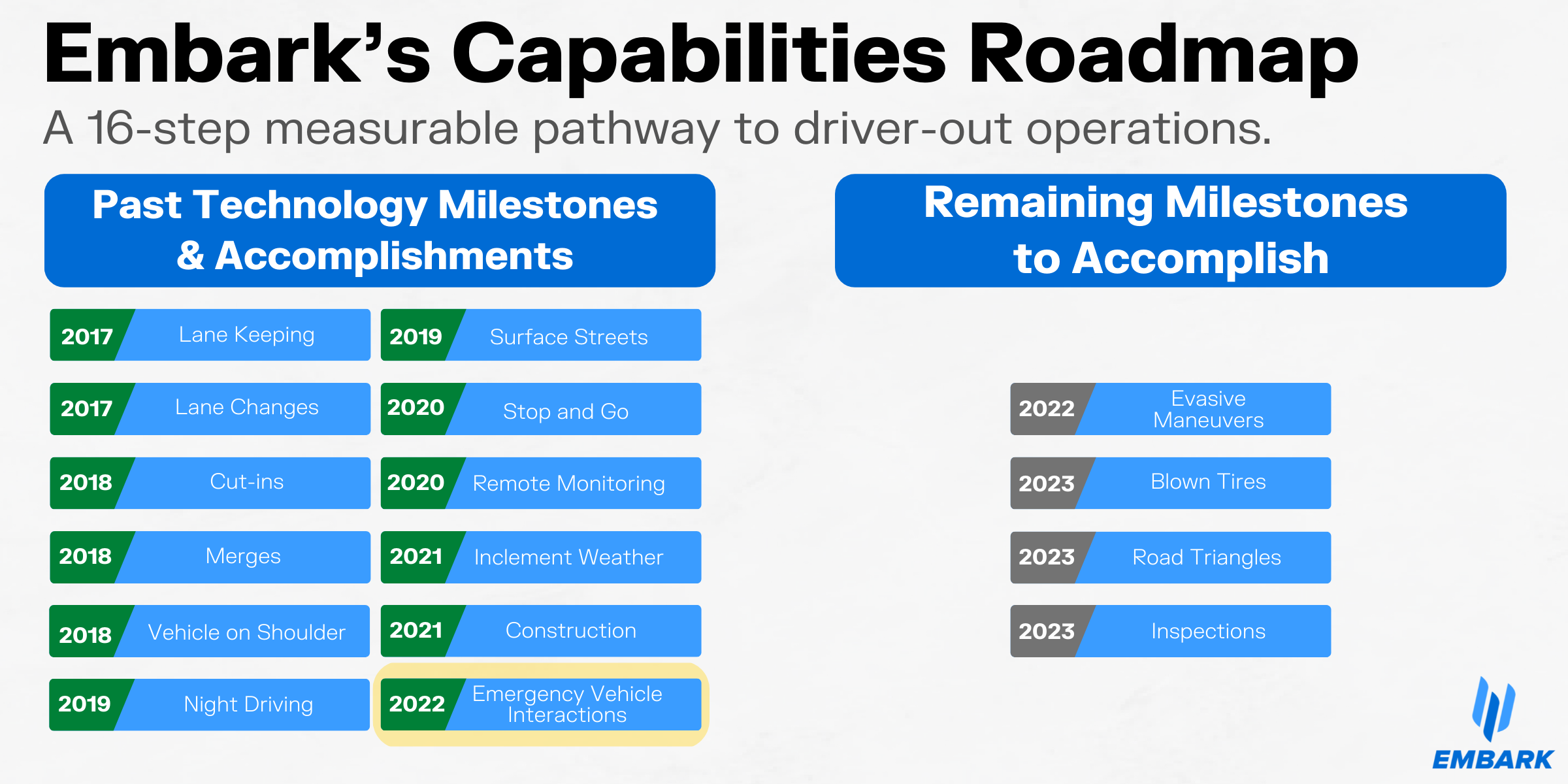 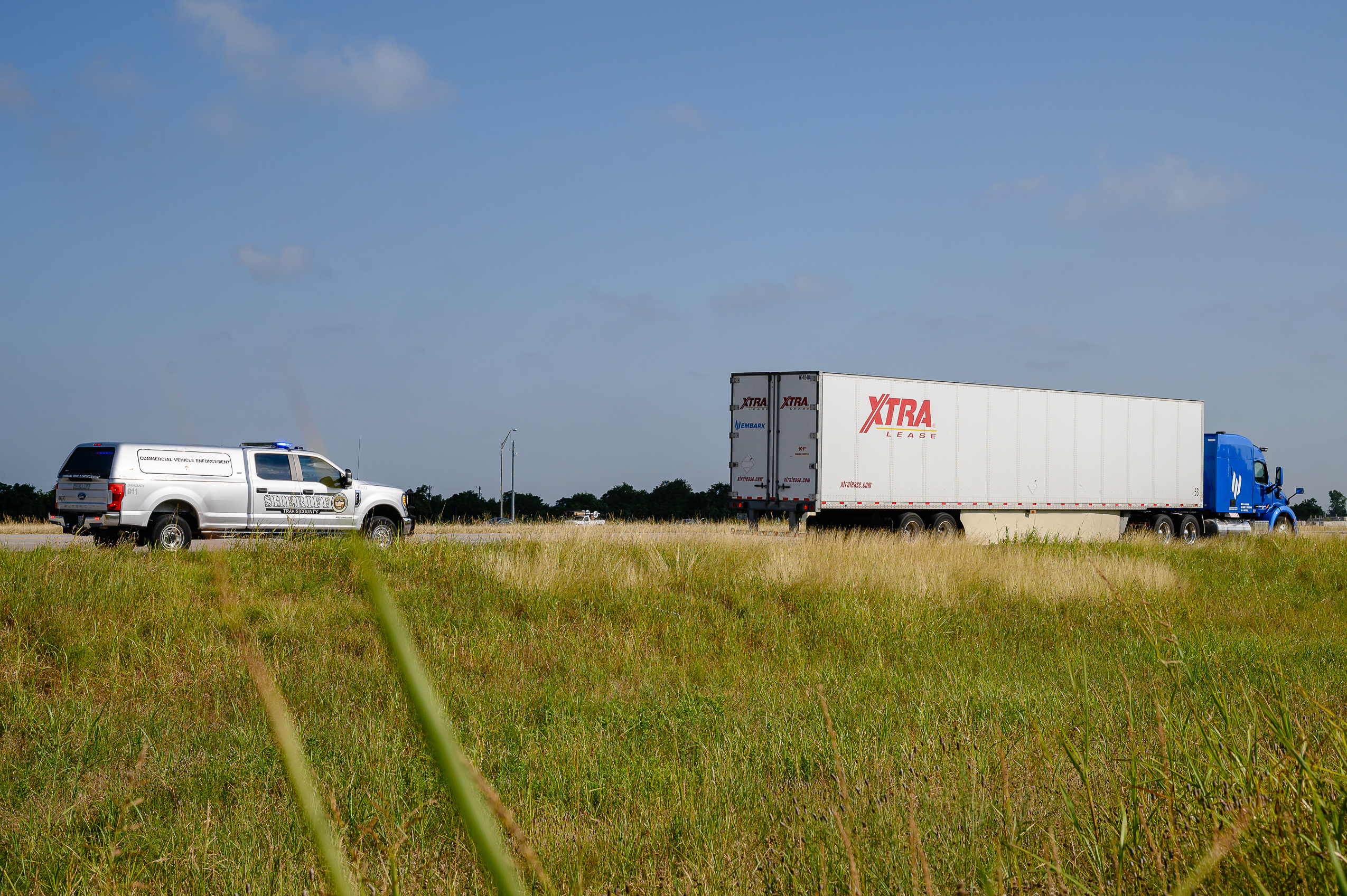 –Company collaborates with Texas Department of Public Safety and Travis County Sheriff’s Office to simulate real-world scenarios on Texas public highways
–Successful demonstration is an industry-first, marking completion of next milestone on Embark capabilities roadmap and bringing the Embark Driver closer to commercialization

SAN FRANCISCO, Aug. 04, 2022 (GLOBE NEWSWIRE) -- Embark Trucks, Inc. (Nasdaq: EMBK, “Embark”), a leading developer of autonomous technology for the trucking industry, today announced the completion of a public demonstration of its emergency vehicle interaction capability. Working closely with the Texas Department of Public Safety (“Texas DPS”) and the Travis County Sheriff’s Office (“TCSO”), Embark developed the capability for Embark-powered trucks to identify and stop for law enforcement vehicles in situations such as traffic stops, and built communication protocols and standard operating procedures between autonomous trucks and law enforcement officers. This represents the first-ever public demonstration of an autonomous truck being pulled over by law enforcement and participating in a routine traffic stop on a public highway. A video of the capability in action can be viewed on Embark’s YouTube channel here.

On Embark’s technical capabilities roadmap (see attached graphic), which details the 16 capabilities required to commercially deploy autonomous trucks in the US Sunbelt, the emergency vehicle interaction capability represents the next milestone achieved by the company. With the completion of this successful public demonstration, Embark has now achieved 12 technical milestones on its roadmap, marking another major step towards commercial deployment of its technology.

“The ability to engage safely in emergency vehicle interactions is necessary to operate an autonomous vehicle on public roads,” said Emily Warren, Head of Public Policy at Embark Trucks. “Law enforcement always needs to be able to stop a commercial vehicle – autonomous or not – to ensure compliance with the law. This capability was designed to work seamlessly within existing law enforcement workflows, without requiring new training or technology investment by first responders.”

Together, these features represent a comprehensive process for Embark-powered trucks to comply with law enforcement requests, just like a human-driven truck would respond in similar situations.

To develop this capability, Embark, TCSO, and Texas DPS executed comprehensive data collection and testing from April to June that included closed-course activity at the Texas A&M University RELLIS Campus test track as well as public road demonstrations. During Embark’s industry-first demonstration, which took place in late June on Texas State Highway 130 near Austin, deputies from the TCSO’s Commercial Vehicle Enforcement division followed an Embark-powered truck along a designated route and successfully completed a traffic stop of the Embark truck. A deputy was able to confirm the truck was safe to approach via an external status display on the side of the truck, then walked through the procedure of accessing the truck’s documentation via an external lockbox, using a code that would be provided by a remote Embark Guardian support technician. The demonstration concluded after the deputy completed his traffic stop and followed the truck as it re-entered highway traffic. Embark published a white paper detailing this procedure and how it can be replicated in other jurisdictions. A link to the white paper is available here.

About Embark
Embark Technology, Inc. (Nasdaq: EMBK) is an autonomous vehicle company building the software powering autonomous trucks, focused on improving the safety, efficiency, and sustainability of the nearly $730 billion a year trucking market. Headquartered in San Francisco, CA since its founding in 2016, Embark is America’s longest-running self-driving truck program and partners with some of the largest shippers and carriers in the nation.

A video accompanying this announcement is available at https://www.globenewswire.com/NewsRoom/AttachmentNg/e4235a5d-8a33-4222-be2d-12ed5c0c4624