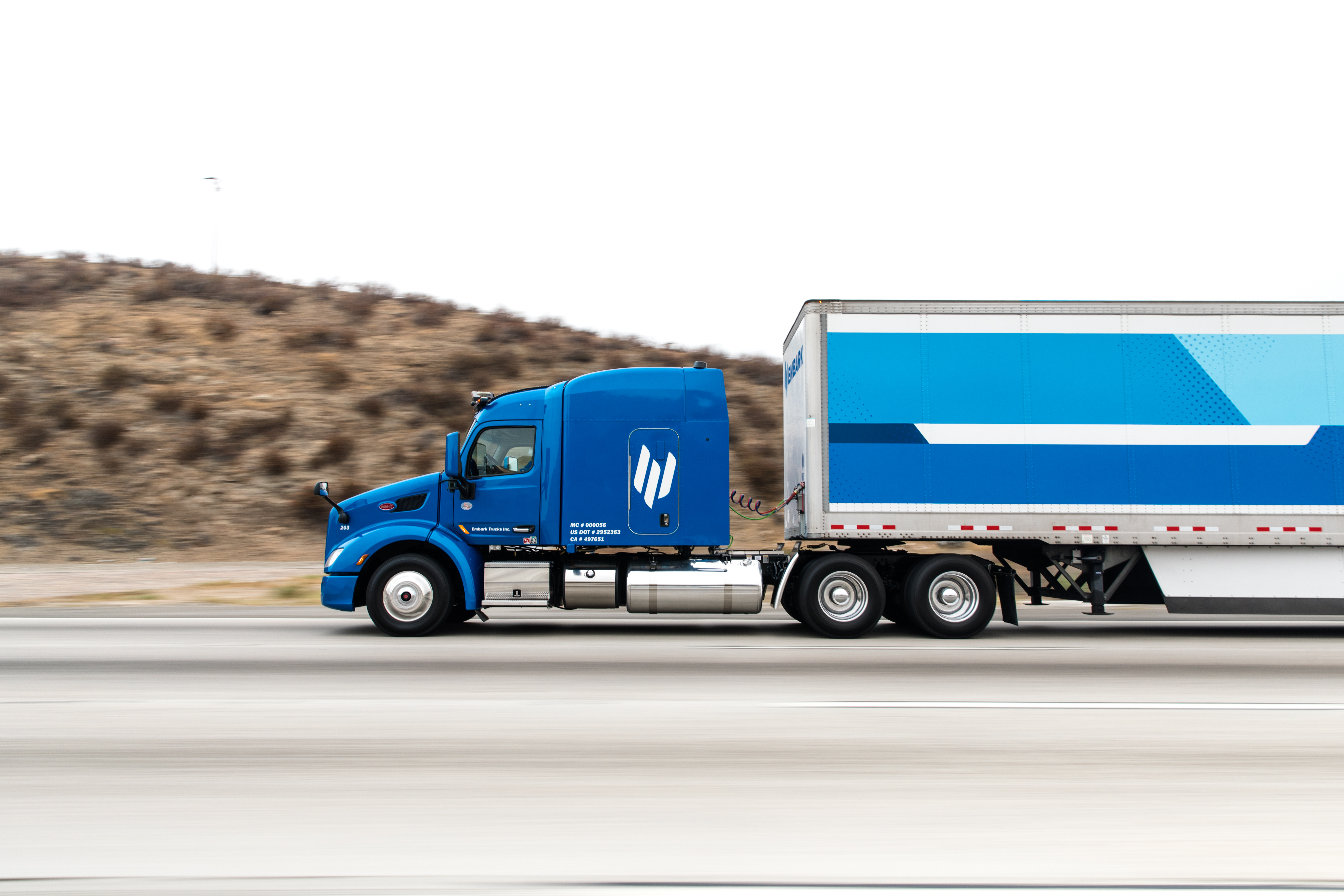 Embark autonomous truck on the road

SAN FRANCISCO and HOUSTON, Dec. 09, 2021 (GLOBE NEWSWIRE) -- Embark Trucks, Inc. (Nasdaq: EMBK, “Embark”), a leading developer of autonomous technology for the trucking industry, today announced its expansion into Texas and the launch of a new autonomous trucking lane between Houston and San Antonio. Embark also unveiled its new autonomous trucking facility and plans to hire aggressively in the greater Houston area in 2022. To support the expansion, Embark announced a partnership with the Texas A&M Engineering Experiment Station to utilize their state-of-the-art test track, and plans to work closely with the Center for Autonomous Vehicles and Sensor Systems (CANVASS) and faculty in the J. Mike Walker '66 Department of Mechanical Engineering at Texas A&M University to perform research and testing as it prepares for its driver-out pilot in 2023.

Establishing a footprint in the Houston area was both a strategic selection and natural fit for Embark. The Houston area offers Embark three key advantages as it scales its business:

Together, these factors enable Embark to better execute against its go-to-market timeline as it prepares for commercial launch of the Embark Driver in 2024. Embark expects to begin hauling freight for its partners between San Antonio and Houston as early as 2022.

“Texas is the center of America's trucking industry, and it’s the perfect home for Embark’s expanded operations. We’re excited by the talent and entrepreneurial spirit that Houston has to offer,” said Stephen Houghton, Chief Operations and Fleet Officer at Embark. “Our new footprint in Texas will support our growing network of partners and fuel our rapid growth across the Sunbelt. As we scale our operations, we will continue to work closely with local and state governments and other organizations so that we improve the safety, sustainability, and efficiency of trucking with autonomous technology.”

Embark’s partnership with Texas A&M University is one of the cornerstones of this expansion. Embark will use the university’s expertise and the test track at the RELLIS Campus to pioneer novel AV capabilities and achieve its remaining technology milestones. These milestones represent the final hurdles to deploying commercially viable autonomous trucks, and include challenges such as emergency vehicle interactions, pulling over to safety in emergency situations, and performing evasive maneuvers, among others.

“Embark’s mission to safely, robustly, and effectively roll out commercial autonomous trucks aligns closely with TEES’ mission to turn research and development activities into useful applications and business activities,” said Dr. Srikanth Saripalli, Director of CANVASS. “We’re excited to welcome Embark to our RELLIS Campus. Our faculty and students will have the unique opportunity to apply theory to the real world by working together with Embark on engineering projects.”

Embark’s expansion into Texas builds on several years of engagement with Texas state officials to share information on the development of autonomous trucks. Embark is a longstanding participant in the Texas Department of Transportation's (TxDOT) Connected and Automated Vehicle (CAV) Task Force, helping prepare the Texas transportation system to take advantage of the safety and efficiency benefits of the technology.

The expansion caps a momentous year for Embark and comes less than a month since the company went public, listing on Nasdaq under the ticker symbol “EMBK.”

Interested in joining Embark in Texas? See our open roles in Texas on Embark’s Careers page.

About Embark Trucks
Embark (Nasdaq: EMBK) is an autonomous vehicle company building the software powering autonomous trucks, focused on improving the safety, efficiency, and sustainability of the nearly $700 billion a year trucking market. Headquartered in San Francisco, CA since its founding in 2016, Embark is America’s longest-running self-driving truck program. The company partners with some of the largest shippers and carriers in the nation, collectively representing over 35,000 trucks and $22 billion in freight spend.

This press release includes “forward-looking statements” within the meaning of the “safe harbor” provisions of the Private Securities Litigation Reform Act of 1995. Embark’s actual results may differ from their expectations, estimates and projections and consequently, you should not rely on these forward-looking statements as predictions of future events. Words such as “expect,” “estimate,” “project,” “budget,” “forecast,” “anticipate,” “intend,” “plan,” “may,” “will,” “could,” “should,” “believes,” “predicts,” “potential,” “continue,” and similar expressions are intended to identify such forward-looking statements. These forward-looking statements include, without limitation, Embark’s expectations with respect to future performance. These forward-looking statements also involve significant risks and uncertainties that could cause the actual results to differ materially from the expected results. Factors that may cause such differences include, but are not limited to: (1) ability to expand into new markets; (2) changes in the applicable laws or regulations; (3) the possibility that Embark may be adversely affected by other economic, business, and/or competitive factors; (4) the impact of the global COVID-19 pandemic; and (5) other risks and uncertainties separately provided to you and indicated from time to time described in filings and potential filings by Embark with the U.S. Securities and Exchange Commission (the “SEC”), including those discussed in the registration statement on Form S-4 and definitive proxy statement/prospectus and other documents filed with the SEC from time to time. These filings identify and address other important risks and uncertainties that could cause actual events and results to differ materially from those contained in the forward-looking statements. Embark cautions that the foregoing list of factors is not exhaustive and not to place undue reliance upon any forward-looking statements, including projections, which speak only as of the date made. Embark undertakes no obligation to and accepts no obligation to release publicly any updates or revisions to any forward-looking statements to reflect any change in its expectations or any change in events, conditions or circumstances on which any such statement is based.