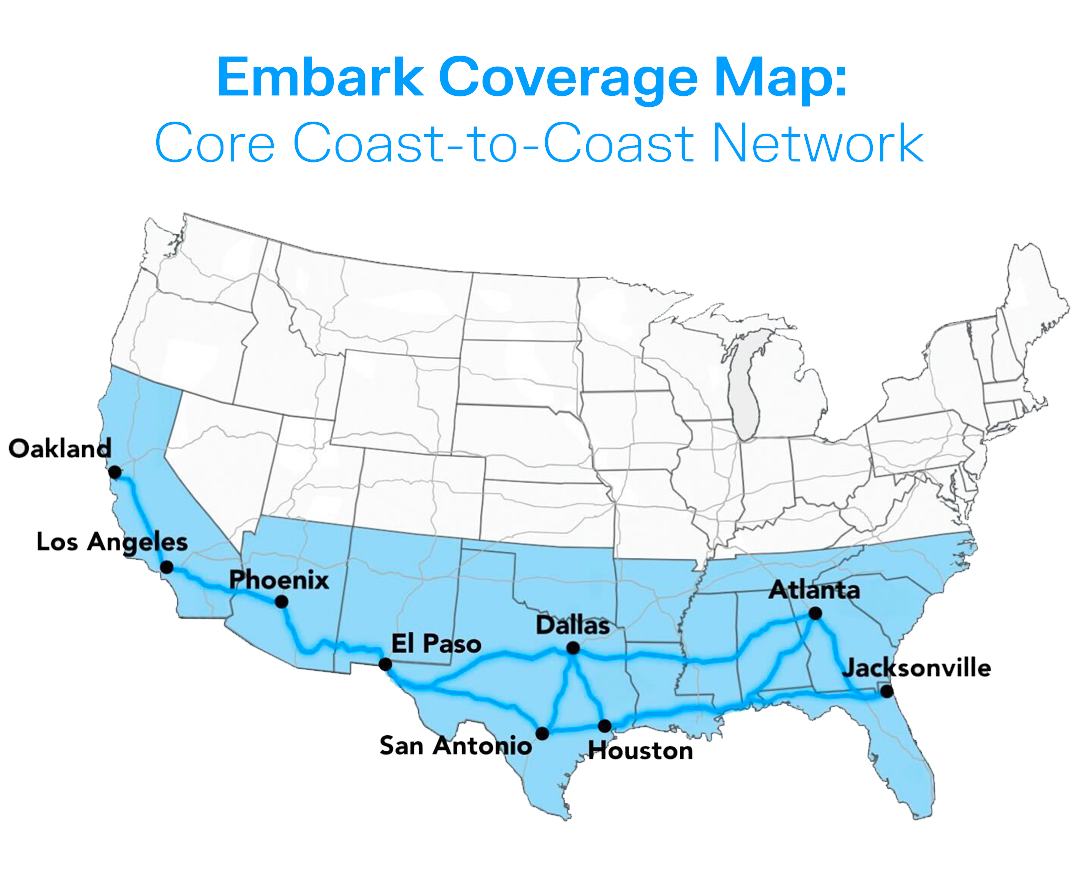 Embark strategically selected these nine sites to eventually automate crucial shipping lanes for its carrier partners. The expanded network that Embark is positioned to serve through these nine sites covered 9.5 billion miles of annual freight in 2020, including Dallas to Houston, San Antonio to Houston, and Dallas to Atlanta – some of the highest-volume inter-city lanes in the US. As a result, by opening these nine sites, 28% of US shipping volume in the Sunbelt is available for autonomous transport by Embark’s fleet partners, who will be able to own and operate the trucks and to begin hauling goods autonomously once Embark’s technology is commercialized.

By operating autonomously across the network, Embark’s carrier partners should be able to deliver faster than is currently possible, due to 24/7 operations. 41% of US shipment miles in the expanded Coverage Map are on lanes that are longer than drivers can complete in a single shift due to Hours of Service regulations. Embark anticipates that the 3.3 million loads on these lanes should become eligible for earlier delivery once automated.

In delivering this core segment of the Embark Coverage Map, Embark leveraged partnerships to accelerate deployment timelines, access superior properties for autonomous trucks, and deliver infrastructure for fleet partners in an asset-light manner. In working with Alterra, Embark was able to leverage Alterra’s deep industry knowledge and team providing nationwide coverage, its portfolio of over 150 existing properties across 30+ states, and its fully discretionary fund, to quickly identify sites and structure flexible usage agreements that enable Embark to scale across specific properties in alignment with the company’s growing volumes. As Embark continues to build density across the Embark Coverage Map ahead of deployment, the company will look to expand to additional sites and leverage other utilization structures such as pay-per-use as operations continue to scale.

Today, the Embark Coverage Map is being used in conjunction with Embark’s fleet partners through multiple pilots. To support fleets operating on the network, Embark, through a long standing partnership, has deployed Ryder operators to certain Embark Coverage Map sites to provide inspections and support services necessary to keep trucks moving in an efficient and safe manner.

Embark's proprietary, patent-pending Vision Map Fusion (VMF) technology is uniquely positioned to allow for this rapid coast-to-coast expansion. VMF minimizes reliance on cumbersome HD maps by instead leaning more heavily on real-time inputs from Embark’s sensor suite, allowing the technology to navigate its environment utilizing a light and easy-to-create and -maintain map. This map-light approach allows Embark to expand to new markets in a way where effort does not scale with mileage.

"Our carrier partners have a meaningful portion of their loads concentrated on a select set of lanes between major markets in the Sunbelt," said Embark CEO Alex Rodrigues. "We are delivering on one of our key 2022 objectives by activating these key markets as one cohesive network today, giving carrier partners the line of sight they need to plan their deployment of Embark-equipped trucks, improving the ecosystem’s ability to rapidly scale in 2024.”

About Embark
Embark Technology, Inc. (Nasdaq: EMBK) is an autonomous vehicle company building the software powering autonomous trucks, focused on improving the safety, efficiency, and sustainability of the approximately $730 billion a year U.S. highway truck freight market. Headquartered in San Francisco, CA since its founding in 2016, Embark is America’s longest-running self-driving truck program and partners with some of the largest shippers and carriers in the nation.

Forward-Looking Statements
This press release includes “forward-looking statements” within the meaning of the “safe harbor” provisions of the Private Securities Litigation Reform Act of 1995. Embark’s actual results may differ from their expectations, estimates and projections and consequently, you should not rely on these forward-looking statements as predictions of future events. Words such as “expect,” “estimate,” “project,” “budget,” “forecast,” “anticipate,” “intend,” “plan,” “may,” “will,” “could,” “should,” “believes,” “predicts,” “potential,” “continue,” and similar expressions are intended to identify such forward looking statements. These forward-looking statements include, without limitation, Embark’s expectations with respect to future performance. These forward-looking statements also involve significant risks and uncertainties that could cause the actual results to differ materially from the expected results. Factors that may cause such differences include, but are not limited to: (1) ability to expand into new markets; (2) changes in the applicable laws or regulations; (3) the possibility that Embark may be adversely affected by other economic, business, and/or competitive factors; (4) the impact of the global COVID-19 pandemic; and (5) other risks and uncertainties separately provided to you and indicated from time to time described in filings and potential filings by Embark with the U.S. Securities and Exchange Commission (the “SEC”), including those discussed in the registration statement on Form S-4 and definitive proxy statement/prospectus and other documents filed with the SEC from time to time. These filings identify and address other important risks and uncertainties that could cause actual events and results to differ materially from those contained in the forward looking statements. Embark cautions that the foregoing list of factors is not exhaustive and not to place undue reliance upon any forward-looking statements, including projections, which speak only as of the date made. Embark undertakes no obligation to and accepts no obligation to release publicly any updates or revisions to any forward-looking statements to reflect any change in its expectations or any change in events, conditions or circumstances on which any such statement is based.

A photo accompanying this announcement is available at https://www.globenewswire.com/NewsRoom/AttachmentNg/40caa5f1-b482-4577-a623-f80748038bbf